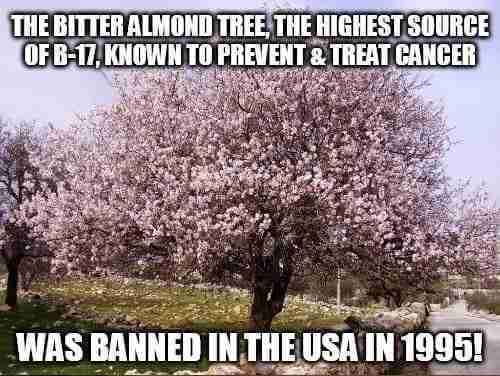 In 2007, bitter almonds (not regular almonds) were becoming popular with alternative medicine due to their vitamin B-17 content. Health food stores stopped selling B-17 in the form of apricot seeds in 2002, due to armed raids. The F.D.A. openly banned apricot seeds, and the extract, because it was touted as a cure for cancer; and curing is not allowed in America. The British Government followed suit, and did the very same things during 2002. Innocent people in both countries were arrested and charged for merely selling apricot seeds, a carrier of B-17 (laetrile).

Bitter almonds were later discovered as the highest source of this vitamin. Vitamin B-17 was still a somewhat newly discovered vitamin, and it is rarely found in nature. In fact, there are organizations affiliated with orthodox medicine which still will not officially recognize vitamin B-17 as a vitamin. The reason for the exploding popularity of vitamin B17, and thereby bitter almonds, was due to the fact that vitamin B-17 has dramatic and miraculous cancer killing properties.

While alternative medicine has had effective and non-toxic cancer cures since the 1930’s, the new vitamin really looked like a magic bullet. There were reports everywhere of cancers being killed merely from patients eating bitter almonds daily. Soon there would be almond extract capsules, so that these same patients would need only to take one cheap, non-toxic pill per day. It did not bode well for the pharmaceutical industry. Hundreds of billions of dollars were about to be lost.

In September of 2007, the F.D.A. claimed that raw almonds had been linked to two salmonella outbreaks in five years, and that all almonds needed to be pasteurized, because they were suddenly a danger to the nation’s health. These salmonella outbreaks were not due to any organic almonds, which reminds us of the many meat recalls.

Salmonella and e-coli are present in our foods only because of grossly unhygienic factory conditions; not because any natural foods are inherently covered with bacteria. For the organic bitter almonds, the required pasteurization would bring only one significant change in them. It would neutralize the vitamin B17. Pristine almonds are the only easily accessible source of vitamin B17. They are illegal now by F.D.A. decree. The highest source of B17, the bitter almond tree, was banned from the U.S. in 1995.

Never before in history had any nation practiced the absurdity of pasteurizing dry (often salted) nuts. Americans may not use raw almonds for food anymore, and much more importantly, Americans are outlawed from using bitter almonds (vitamin B17) to cure cancer. Judging from the F.D.A.’s bizarre aggression towards almonds that contain intact vitamin B17, and apricot seeds, it is easy to conclude just how powerful and effective vitamin B-17 is for curing cancer, at least for those of us who are knowledgeable about the F.D.A.’s history.

Despite floods of phone calls and letters of disapproval to the U.S.D.A. and the F.D.A., almonds sold in the U.S. must now be pasteurized. These same agencies have notified food producers that they may freely and dishonestly label their pasteurized almonds as ‘raw’. Therefore, almonds in the United States that are labeled as ‘raw’, are actually deceptively labeled. No